Stephen William Hawking expanded our knowledge of the universe and showed that no matter the obstacle, you can achieve amazing feats

You may know him for his best-selling book, A Brief History of Time, for his over 230 publications in various scientific journals, for his appearances on several TV shows, including The Big Bang Theory and The Simpsons, or through the Oscar-nominated movie on his life, The Theory of Everything. Or you may simply know him as the brilliant scientist with ALS.

However you know Stephen Hawking, it comes as no surprise that he is considered one of the greatest minds of this lifetime, winning multiple awards in recognition for his work in physics and cosmology.

To honour the late, brilliant Professor Stephen Hawking, we asked TopCV's Senior Staff Writer TC Paulson to create a CV that showcases Hawking's achievements across his more than 50-year career theorising about the stars, space, and time.

Given Hawking's work in the field of science and academia, Paulson opted to write his CV using an academic CV format that allowed extra space for Hawking's impressive and extensive list of publications.

Below are the first two pages of his academic CV. We invite you to take a closer look at the groundbreaking work that changed how we perceive space and time and catapulted Stephen Hawking on to the world stage. 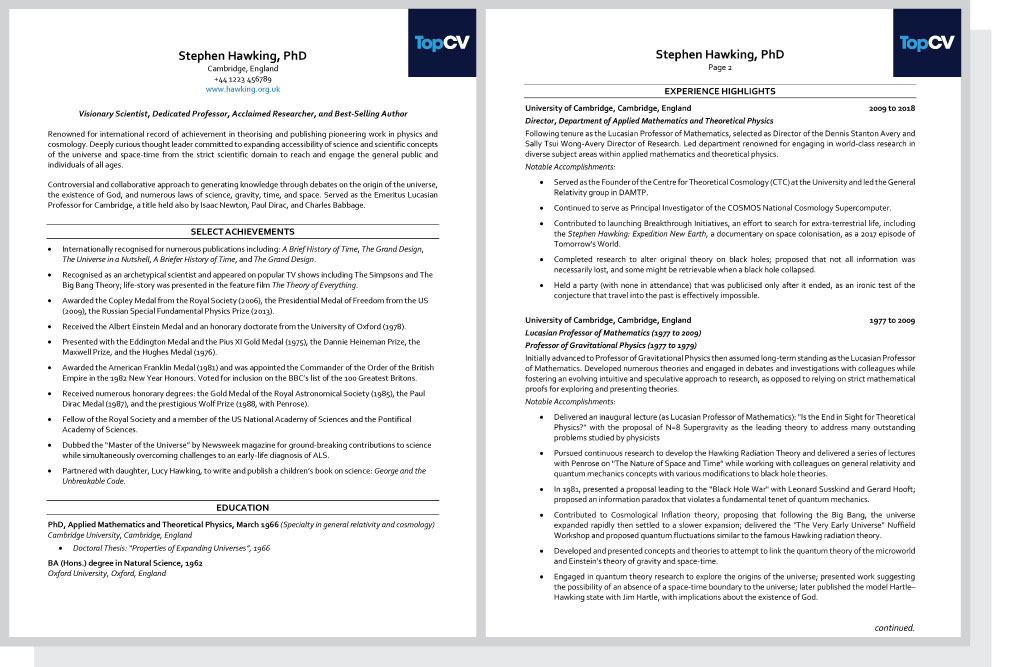 Renowned for international record of achievement in theorising and publishing pioneering work in physics and cosmology. Deeply curious thought leader committed to expanding accessibility of science and scientific concepts of the universe and space-time from the strict scientific domain to reach and engage the general public and individuals of all ages.

Controversial and collaborative approach to generating knowledge through debates on the origin of the universe, the existence of God, and numerous laws of science, gravity, time, and space. Served as the Emeritus Lucasian Professor for Cambridge, a title held also by Isaac Newton, Paul Dirac, and Charles Babbage.

•Recognised as an archetypical scientist and appeared on popular TV shows including The Simpsons and The Big Bang Theory; life-story was presented in the feature film The Theory of Everything.

•Awarded the Copley Medal from the Royal Society (2006), the Presidential Medal of Freedom from the US (2009), the Russian Special Fundamental Physics Prize (2013).

•Received the Albert Einstein Medal and an honorary doctorate from the University of Oxford (1978).

•Presented with the Eddington Medal and the Pius XI Gold Medal (1975), the Dannie Heineman Prize, the Maxwell Prize, and the Hughes Medal (1976).

•Awarded the American Franklin Medal (1981) and was appointed the Commander of the Order of the British Empire in the 1982 New Year Honours. Voted for inclusion on the BBC's list of the 100 Greatest Britons.

•Received numerous honorary degrees: the Gold Medal of the Royal Astronomical Society (1985), the Paul Dirac Medal (1987), and the prestigious Wolf Prize (1988, with Penrose).

•Dubbed the “Master of the Universe” by Newsweek magazine for ground-breaking contributions to science while simultaneously overcoming challenges to an early-life diagnosis of ALS.

•Partnered with daughter, Lucy Hawking, to write and publish a children's book on science: George and the Unbreakable Code.

Following tenure as the Lucasian Professor of Mathematics, selected as Director of the Dennis Stanton Avery and Sally Tsui Wong-Avery Director of Research. Led department renowned for engaging in world-class research in diverse subject areas within applied mathematics and theoretical physics.

•Served as the Founder of the Centre for Theoretical Cosmology (CTC) at the University and led the General Relativity group in DAMTP.

•Continued to serve as Principal Investigator of the COSMOS National Cosmology Supercomputer.

•Contributed to launching Breakthrough Initiatives, an effort to search for extra-terrestrial life, including the Stephen Hawking: Expedition New Earth, a documentary on space colonisation, as a 2017 episode of Tomorrow's World.

•Completed research to alter original theory on black holes; proposed that not all information was necessarily lost, and some might be retrievable when a black hole collapsed.

•Held a party (with none in attendance) that was publicised only after it ended, as an ironic test of the conjecture that travel into the past is effectively impossible.

Initially advanced to Professor of Gravitational Physics then assumed long-term standing as the Lucasian Professor of Mathematics. Developed numerous theories and engaged in debates and investigations with colleagues while fostering an evolving intuitive and speculative approach to research, as opposed to relying on strict mathematical proofs for exploring and presenting theories.

•Delivered an inaugural lecture (as Lucasian Professor of Mathematics): "Is the End in Sight for Theoretical Physics?" with the proposal of N=8 Supergravity as the leading theory to address many outstanding problems studied by physicists

•Pursued continuous research to develop the Hawking Radiation Theory and delivered a series of lectures with Penrose on "The Nature of Space and Time" while working with colleagues on general relativity and quantum mechanics concepts with various modifications to black hole theories.

•In 1981, presented a proposal leading to the “Black Hole War" with Leonard Susskind and Gerard Hooft; proposed an information paradox that violates a fundamental tenet of quantum mechanics.

•Contributed to Cosmological Inflation theory, proposing that following the Big Bang, the universe expanded rapidly then settled to a slower expansion; delivered the "The Very Early Universe" Nuffield Workshop and proposed quantum fluctuations similar to the famous Hawking radiation theory.

•Developed and presented concepts and theories to attempt to link the quantum theory of the microworld and Einstein's theory of gravity and space-time.

•Engaged in quantum theory research to explore the origins of the universe; presented work suggesting the possibility of an absence of a space-time boundary to the universe; later published the model Hartle–Hawking state with Jim Hartle, with implications about the existence of God.

•Completed theoretical work to result in the Arrows of Time theory and a 1985 publication theorising that when the universe stopped expanding and collapsed, then time would run backward, but then redacted theory following calculations by colleagues Don Page and Raymond Laflamme.

Received appointment to world-renowned US research and technology institute to collaborate with colleagues to study the properties, existence, and nature of black holes. Completed rigorous research, delivered lectures, and fostered strong networks with leading scientists.

•During this time, engaged in a now famous wager on the proposition that black holes did not exist, specifically whether the X-ray source Cygnus X-1 was a black hole.

Under supervision of Dr. Dennis Sciama, engaged in inaugural research in cosmology to complete PhD in 1965 then transitioned among Cambridge colleges to envision, plan, complete, and publish foundational theories and discoveries in mathematics and theoretical physics. Transitioned between the Department of Applied Mathematics and Theoretical Physics, Gonville & Caius College, and the Institute of Astronomy.

•Upon completing Doctoral Thesis, Properties of Expanding Universes, assumed role as a Research Fellow then served as Fellow for Distinction in Science (1969) at Gonville & Caius College within Cambridge.

•Won the Adams Prize for essay Singularities and the Geometry of Space-time, and subsequently transitioned to the Institute of Astronomy in 1968.

•Returned to Department of Applied Mathematics and Theoretical Physics (1973) as Research Assistant to collaborate with George Ellis to write and publish, The Large Scale Structure of Space-Time.

•In 1975, became Reader in Gravitational Physics at Department of Applied Mathematics and Theoretical Physics.

•Accepted the Fellowship for Distinction in Science, a specially created role to remain at Caius College.

Find out if you have a job-winning CV. Start with a free CV critique today!

This article was originally written in 2019 and has been updated to reflect TopCV's editorial guidelines as well as include a text copy of the CV for accessibility.