The TopCV Job Seeker Sentiment Index was created in April 2021 to keep abreast of how job seekers are feeling and behaving amid so much uncertainty. According to its latest figures, UK job seekers are starting to see light at the end of the tunnel. Confidence about current job market conditions is up over 24% in the last six months.

Even those who were feeling negative about their own job prospects were optimistic about the UK job market in general. The majority of people who had reported feeling “frustrated” or “very negative” about their personal job search in September acknowledged that today's job market and overall job security is better than it was a year ago — a substantial increase from the previous month. In addition, the percentage of respondents who reported feeling negative about their job searches has also steadily declined month-on-month. 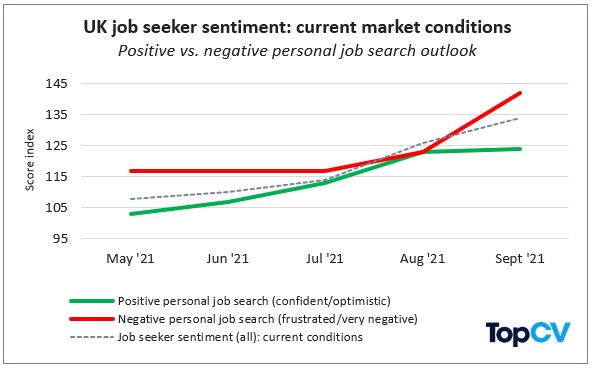 Amanda Augustine, careers expert at TopCV, commented: ''We were surprised to see that confidence in the current job market has grown in spite of the end of the furlough scheme. The fact that redundancies have not been as high as expected may be contributing to a more positive outlook.”

When asked about the current job market and overall job security, other key findings included the following:

The TopCV Job Seeker Sentiment Index survey was conducted online within the United Kingdom between 1st April 2021 and 30th September 2021, among 8,952 adults. Respondents were randomly selected from among TopCV's site users, and the findings are at a 99% confidence level with margin of error +/-3%.

The Job Seeker Sentiment Index was first calculated and benchmarked in April 2021. This value is adjusted monthly based on the results of a random survey of job seekers' opinions on current conditions and future job market and workplace expectations.

*The TopCV Job Seeker Sentiment Index was inspired by the University of Michigan Consumer Sentiment Index (UMCSENT) and has been computed using the same methodology. Scores of 100 or higher indicate an increase in positive sentiment compared to the April 2021 benchmarks, whereas sentiments of 99 or lower indicate an increase in negative sentiment compared to the benchmarks.

TopCV, a Talent Inc. company, is the world's premier CV-writing service, analysing millions of CVs and LinkedIn profiles each year. Job seekers work directly with professional writers and industry experts to redefine their personal brand and stand out from the crowd during the job-search process. Follow TopCV on Facebook, LinkedIn, Instagram and Twitter.

Job seekers looking for a career change optimistic about the market

Job seeker confidence improves for the third month in a row